In late April, about to fly east to bury my father, I bought a book for the trip: Paul Theroux’s Ghost Train to the Eastern Star.  My mother had tried to interest me in Theroux’s first train book in the 1980s, View from the Bus

but I was discovering earlier travel writers—Lafcadio Hearn, Pierre Loti, Freya Stark—and had dismissed her recommendation. Now he and I were both older. I bought his follow-up journey as an e-book, dip-in-and-out trip insurance for unexpected delays.

There were none. In fact no time for reading at all. Our return from Boston took us through eastern Canada, but we traveled by Greyhound and then train, following the spring north and west. Rivers, birches, boulders, evergreen-spiked hills: what the word countryside meant to me as a child. I couldn’t stop watching. Camera lens against the pane, I took pictures as we rode: a greenish haze punctuated by pale tree trunks—or, when the train or bus slowed and I wanted to experiment with the i-pad, a pointillist frenzy of tiny new leaves.

The trip was not entirely bookless. I’d prepared for the Toronto segment by re-reading Michael Ondaatje’s love-letter to his adopted city, In the Skin of a Lion. We spent one afternoon roaming around the monumental lakeshore waterworks that figure as a populist acropolis in the novel. I'd never been to a lake where I couldn't see the other side. It was like an ocean in a dream: bluer, milder, calmer. The next day we walked across the Bloor Street Bridge whose construction is part of Ondaatje’s story. It still spans a cultural divide along with  a river. We found mansions pricked out with spring bulbs on the Anglo side and a tipsy Greek lunch on the other.

The flight home was another story. Cramped and hungry I lost myself in the dark northern violence of a Harry Hole mystery. 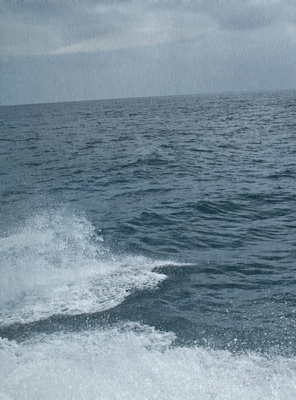 As May headed to June and L. A. mornings were more often gray than blue, I became aware that my annual migrations to New England had come to an end. Other horizons, too, it seemed were closing in.

A brief respite was provided by The Bay of Noon, Shirley Hazzard’s brilliant coming-of-age novel-cum-memoir of post-war Naples, my copy a product of a two-day visit to San Diego and its second-hand stores. Hazzard, who has lived on several continents, is especially penetrating about why northerners head south. But enlightenment didn’t last: I developed eye trouble. Somewhat sullenly, I picked up Ghost Train to the Eastern Star. An e-book, it had adjustable print.

Like Theroux’s own journey, my progress through the book was a slow train full of unscheduled stops and deviations. Not because I didn’t find the story compelling, but because Theroux’s travels kept putting him in company with writers I wanted to know better.

First up was the Turkish Nobel prize winner, Orhan Pamuk. His conversation with Theroux at an Istanbul dinner party intrigued me where his prize-winning hadn't. I'd hoped to begin with his first novel, My Name is Red, but my library didn’t have it, so I took Snow  instead.

It was exciting to read fiction with so many layers. There's the precise description of a city (Kars) seen through a visitor’s eyes. Then Pamuk’s sly and beautifully controlled tone, and his artfully naïve narrator which allow the seeming blacks and whites of Turkish politics and religion to emerge in a more complicated, human grey-scale. Finally, there's the book’s endless, imaginatively reiterated snowfall—days of it—at once naturalistically precise and perfectly metaphorical. A white-out, a snow-job, a blizzard—Pamuk's snow shifts the shape of everything.

It's easy growing up in New England to believe that snow is an indigenous specialty. Ours is a blithely insular corner of the world, and there are all those Christmas images featuring clapboard colonial houses and windows-with-shutters draped in artful white. My first winter in Los Angeles I looked for cards that suggested my new surroundings. Something in Santa Fe pastels with a Christmas cactus in a painted bowl was the best I found. At least the wall behind the bowl was stucco. But whether fleeing the winters or the attitude, New Englanders have long been perceptive travelers—Massachusetts native Theroux being one of the most recent. Henry James's A Little Tour in France is both a classic of the genre and still pertinent a century after it was written (e.g. The French countryside’s “look of intense, and peculiar rurality…. It is a peasant's landscape; not, as in England, a landlord's.“). My own Los Angeles neighborhood was first described by Cambridge's Richard Henry Dana, in Two Years Before the Mast.  At the time (1835) it consisted of a bad harbor, one house, and a hill (still here) where coyotes sang him to sleep. They've been gone from this end of town for decades, foiled by the multiple lanes of the freeway system. Until this spring, that is, when one was sighted at a local park.

In fairness, though, photographers may be forgiven for thinking that New England does have a lock on snow. Vermont-born Wilson Bentley had no need to travel: he found enough exotic structures in his backyard to occupy him for a lifetime. Pioneering the technique of isolating snowflakes on a black background, he photographed over 5000 glittering, soon-to-be-melted crystals and propounded the theory that no two are alike. It's Bentley's carefully edited images, now in the public domain, that the world sees when it thinks of flakes. 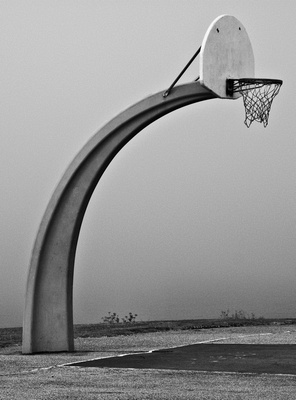 View from the Hill

Snow en masse presents other difficulties (I'm talking photography here, not school closures), namely the absence of contrast and the presence of glare. I shoveled my last steps at my parents house in 2007. Now what I have in its place as a sudden descending presence is fog. Like snow, it's not a convenient subject to capture—too much brightness, too much blur. But it's a near-permanent resident of my neighborhood.

Driving to my Father’s nursing home in the last year of his life I would travel the coast drive, cliffs above and below me. I learned the curves where the fog nearly always crossed the road and the flat stretch by the shopping center that it often avoided. The last leg of the trip, up a 1000 foot hill, would usually put me above the gray. But sometimes I would leave him in a cold cloud and travel down to a brilliant sunset. I rarely had the camera when I wanted it.

I spent a lot of time that year starting books and not finishing them. Remembering this, I was determined to keep going back to Theroux, determined to maintain some kind of thoroughfare between each new sidetrack.

All photographs copyright ariel swartley. Click on any for more information.

Ezrha Jean Black(non-registered)
Picking this up via a Carolina Miranda (ArtNews, etc.) tweet. Miss you Ariel Swartley and your always acute, adventurous, thoughtful reading -- of just about everything. (Also a fan of James' Little Tour; also Pamuk's Snow (also his book on Istanbul -- read about half of it before/during a trip to Istanbul in 2011). I, too, seem to be having a year (or two) of picking up books & not finishing them. Great to see your blog -- you're such a terrific writer. xox
No comments posted.
Loading...
Subscribe
RSS
Recent Posts
Up in the Air The mountain project, or where I've been keeping my sanity A Season in Point Russe: a #photografic novel "SIGHTED_The Records" Comes True Red States Can't Happen Here I Make Mistakes Dry Times Our Part of Town Story Line
Keywords
photography weather California vintage area 51 dream snow Nantucket house mystery
Archive
January February March April May June July August September October November December
© Ariel Swartley
Powered by ZENFOLIO User Agreement
Cancel
Continue