This is part 2 of a long-form article about a summer reading adventure inspired by Paul Theroux’s Ghost Train to the Eastern Shore. Part 1--with books by Michael Ondaatje, Shirley Hazzard, Orhan Pamuk, and more--with was posted on 9/25/13

Reading Ghost Train to the Eastern Shore, I was rattling across the increasingly odd -stan states and looking forward to India on the horizon. Events, however, conspired to keep me in near-Asia. By the time I finished Orhan Pamuk’s Snow, the obliging Los Angeles library had delivered another novel recommended by Theroux to my local branch. Theroux calls Ali and Nino, by Kurban Said “the great Azerbaijani novel…a book so persuasive in its detail and mysterious in its origin, it made me want to go there.” He goes on to describe the author as “a Muslim…who had also used the Turkish name Essad Bey, and had been born a Jew in Baku named Lev Nussimbaum.“

For me, the words “great Azerbaijani novel” were persuasive enough.

It wasn't simply that, suddenly single-coastal for the first time in years, I was avid for any escape—though I was. The habit of always having another option when the present one paled had become thoroughly ingrained. But without knowing anything about Azerbaijan, I’d been attracted to the country since childhood when I‘d seen it’s exotic name on a packet of foreign postage stamps. For kids in the pre- Google Image era, stamp-collecting was an early introduction to travel literature. Physicist Richard Feynman credited his longtime obsession with Tannu Tuva to the hobby. Triangular, with strange animals on them is how I recall the description of the stamps in Ralph Leighton’s 1991 book on Feynman’s quest, Tuva or Bust.

Childhood is a long exercise in imposing our imagination on the world around us and then trying to knit the two together. In Feynman's case the exercise led to a revolutionary physics. In others, what remains in adulthood is the desire to impose. Oil-rich Baku was fertile ground in that regard, but not wholly to the imagination's detriment. Alfred Nobel funded his portion of the Swedish prizes from shares in his family’s pioneering Baku fields.

The leads of Said’s novel, subtitled “a love story” are a Muslim teen of noble birth and his wealthy Russian Orthodox girl friend. At that time (the early 1900s), Baku saw itself as the meeting point of Europe and Asia, and cherished a notion of itself as a city tolerant of religious and cultural diversity. WWI, the Russian Revolution, and the intransigence of human ambition show the lovers the flaws in the city’s view of itself. But the story, told in sensuous, hyper-romantic prose, moves seamlessly between poetry and politics, casinos and harems, leaky boats and limousines.

Perhaps the landscape of the Caucasus—“sternly majestic” as Tolstoy saw it —enforces high romance. But it wasn’t until Ali and Nino fled to a hillside fortress in Dagestan that I recognized where I was: in the country of The Sabres of Paradise. Written in 1960, Lesley Blanch’s formidable history of Shamyl, the 19th century Iman who against all odds defied Russian expansionism, is the charismatic historical context for Ali and Nino’s Baku.

Blanch herself is worthy of a detour. A former editor of Vogue’s Paris edition, she initially devoted her extravagant prose—as billowy and highly finished as the dresses she featured in the magazine—to women who abandoned convention and followed their passions to desert tents, silk lined harems, or the chambers of an upstart general. Among them: Isabel Burton and Isabelle Eberhardt in The Wilder Shores of Love, (1954) and the Empress Josephine in Pavilions of the Heart (1974). 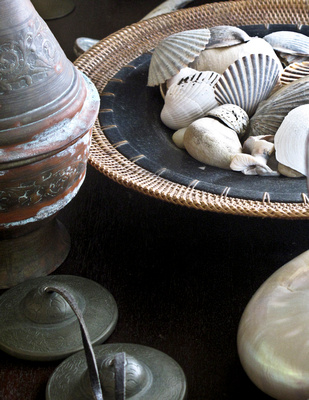 For all the heavy breathing, her biographies were underpinned with research as sturdy as whalebone. In turning her attention to Imam Shamyl, Blanch, then living in Paris, was able to track down his descendents as well as still surviving Imperial Russian and Turkish sources. It was a prescient choice of subject. Reviving and enforcing the Prophet’s laws, and mounting a holy war for Allah against foreign conquest, Shamyl remains, in the Caucasus and elsewhere, a model of the warrior/imam.

More information about the Caucasus of Ali and Nino’s day came from Tom Reiss’s book The Orientalist, also praised by Theroux. Reiss tracks the twisting story of the pseudonymonous Said beginning with his birth in 1905 and his Baku childhood, son of a respected Jewish businessman and his Red Russian émigré wife, through his conversion to Islam and prolific career as Essad Bey, a journalist in Germany and the US who wrote on his negative experiences with Communism. The book concludes with Said/Bey/Nussimbaum's death as a protected but impoverished refugee in Mussolini’s Italy.

For Reiss, Nussimbaum’s attempts to reconcile his sense of self with that of the world's serves as a window on European Jewish consciousness in the first third of the twentieth century. Quoting Disraeli and early pre-Zionist writers, he explores their frustration with the limits of assimilation in the West and a concomitant celebration of otherness, leading to an increasing identification with the East.

In the end, of course, none of Nussimbaum's identities offered protection against Hitler's decrees. Even as Essad Bey, Nussimbaum could no longer publish in Germany, his home since his teens. ‘Professional home’ may be a more accurate description. Emotionally, he seems to have felt himself an exile from the moment he entered Europe. In Ali and Nino he created a homeland for himself: vivid and romantic, beautiful and damned.

What is the color–palate of memory?  Hyper-saturated like the illuminations on a medieval manuscript? Soft and a little blurry like watercolors or pastels; or a mixture of high contrast and subtlety, some hard edges, some fuzzy one, like a black and white photograph or pen and ink drawing?

While waiting for Reiss’s book  to arrive at the library, I discovered  Orhan Pamuk’s Istanbul: Memories and the City. Both an autobiography and an exploration of his hometown through photographs culled from local archives and his family’s collection, Pamuk’s book moves through topics—ancient history, foreign commentators, his parents troubled relationship—as though they were neighborhoods. The reader becomes a walker, crisscrossing many-storied avenues, finding certain corners becoming familiar, halted frequently by a turn of the page that reveals a black and white glimpse of a ruined arch or narrow wooden balconies.

I felt a little envious of Pamuk, who still inhabits the place he fell in love with as a child. That was something I had tried to do, with increasing difficulty over the last few years, and had finally failed at. As the summer went on, I was sometimes surprised that I wasn't going back. When I dreamt of the house, though, it was always with fear that the new owners would arrive and find me still in it.

My envy of Pamuk stopped cold a day or two after I started his memoir as reports of the protests in Taksim Square and their brutal suppression began to appear in the news. In Pamuk's Istanbul, the square is the elegant focal point, a place to purchase cakes, to meet friends, to see and be seen. The plans which sparked the initial protests, those aiming  to turn Taksim Square into a steel and glass tourist ghetto, clearly violated that spirit. In the days of uprising and death that followed, his book’s black and white views seemed to grow more and more distant, more and more precious, and infinitely sad. I was forcefully reminded that it is not necessary to leave a place to to discover oneself an exile.

All photographs copyright ariel swartley. Click on any for more information