Printing my first show as a fledgling photographer, a series called The Path at Noon, I loaded the paper wrong side front. Ugh. Ink lays on the uncoated side of expensive photo paper like a grubby oil slick. It can take months to dry and smudges everything. 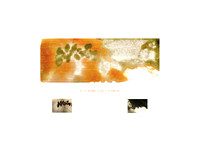 After beating myself up as a careless idiot for a while, I thought to regard the mess as a call to print by hand. Using photo paper, this time right side to, I took three impressions, each successively paler, of the gooey image. A ghostly fourth remained on the misprint 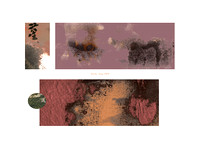 The original photos of  shadows on a woodland path  were a mix of soft and sharp edges in shades of sepia. The new transfer prints featured textured vegetal shapes in tans and greenish grays. I referred to them laughingly as The Path taken in Error, and enjoyed their abstract patterns, especially those that suggested prehistoric trees and aerial landscapes. 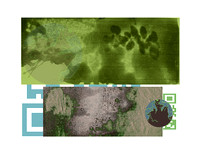 I tried photographing them and making prints, but the peculiar green refused to come through. I got mad enough to crumple a sheet and throw it in the corner. The next day, in the spirit of following a trail where it led, I smoothed the crumpled paper and scanned it. Eventually, I strung four dark to light brown images together lengthwise and had them printed on thin white cotton which I hung in the workroom window.

#4 Path Seen from a Distance

The Paths and their Errors could have ended there, but one October noon five years later, my partner and I got lost in the desert. It was only for a few hours, but the experience of having no idea which way to turn was shocking. We had been careless. Planning a brief, before-lunch hike in an area we knew, we carried no compass. We wandered in circles and climbed many needless hills before we rediscovered our starting point. 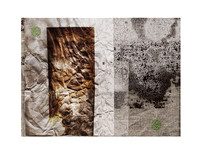 Back In the studio, I was lost as well. After months of moving, I had an expanded workspace, a new printer, and no idea what I wanted to do. The long fabric image of the original Error had moved with me and hung by the desk. I thought about the mistakes we had made on our hike, and how they had led through recriminations to appreciation and new resolutions. 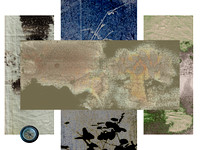 Returning to the beginning of the old shadow Path, I saw that its pratfalls might be reworked in new sizes and colors and could incorporate scans of the printed fabric.
I thought, too, of the ways we foster an illusion of security with compasses, map coordinates, and web links, and how hard it can be to align those orderly abstractions with the ground we have to walk on. 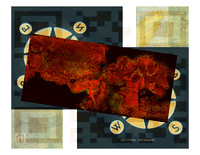 Trying to Get Home

#7 Trying to Get Home

I think this is the last picture in the Path Taken in Error series, but given that Home, when we return to it, is never quite the way we left it, I cannot be absolutely sure.